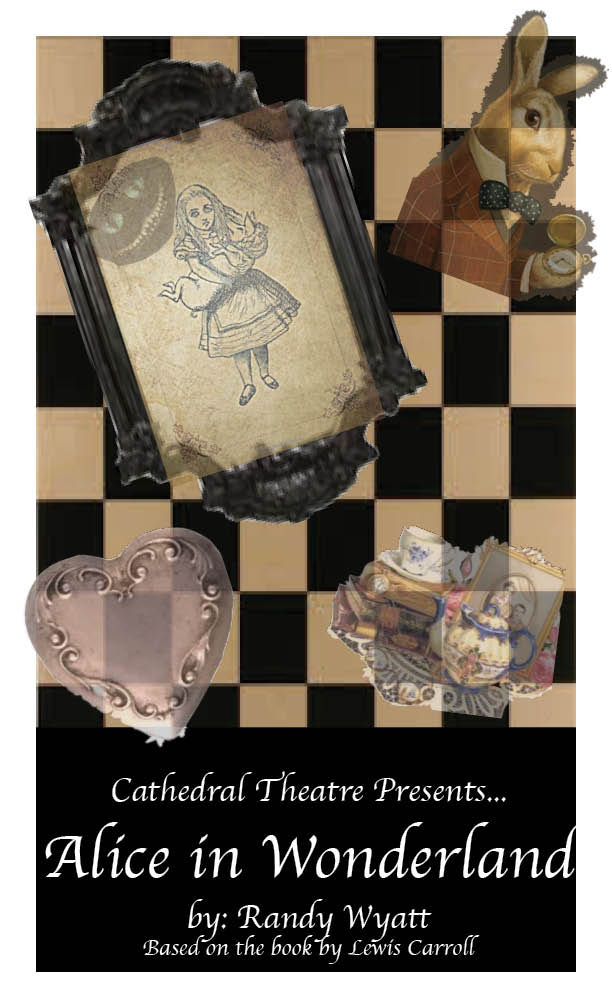 ALICE IN WONDERLAND
By: Randy Wyatt
Based on the novel by Lewis Carroll

Check out these amazing photos of the Fall Play...

HADES: A Retelling of the Persephone Myth
By: Nelly E. Cuellar-Garcia

Hades: A Retelling Of The Persephone Myth

The people of Ancient Greece created a very complicated mythology in order to explain the things they didn’t understand; things like the rage of the sea, the sunrise and sunset, why olives were so common in the area, where you go after death, the winds, lightning (sky fire) and so on.

Many things were explained simply. The seas were angry because they were ruled by the fierce, emotional god Poseidon. The sun rose and set due to the god Apollo carrying it across the sky in his chariot, and the goddess Athena once planted an olive tree by touching her spear to the earth in a challenge of importance against the god Poseidon. However, some things were not as easy to explain, and therefore, came with longer explanations and more complicated myths and characters.

One such event was the changing of the seasons.

Why did the temperature change and the sun stop moving as high in the sky? Why were there times when crops refused to grow and animals hid? To understand this tale, the tale of Hades and Persephone, one of the original love stories of the Greeks, you must first understand the characters and background of the story.

Background: The Greeks believed that in the beginning, there was nothing but pure chaos, and then one day came forth the original goddess Gaia, the earth. She gave birth to Uranus, the starry sky, and together they got married and had many children, the most important of which were known as the Titans.

There were twelve Titans in all, but only two are necessary to understand this tale. There was Cronos, the strongest of the Titans, and his sister and wife Rhea. Cronos was power-hungry, and so he destroyed his father and siblings (besides Rhea). Gaia, his mother, hid down in the depths of herself as Cronos claimed to be Titan of the entire universe. Cronos feared a prophecy that one of his children would one day overthrow him, and so each time Rhea had a child, she was expected to feed it to him. One day after giving birth to her sixth child, Zeus, she hid him away and fed Cronos a rock swaddled in a blanket.

It was when Zeus was older that he came back, destroyed his father, and saved his siblings. Together they were the original six gods and goddesses. There was Zeus, god of the sky and the ruler of the gods; Poseidon, god of the seas; Hades, god of the underworld and riches of the earth; Hestia who was the first child of Cronos, and who is goddess of the hearth and of home; Hera, goddess of women and marriage; and finally Demeter, the goddess of agriculture.

Over time, many new deities came to be, such as Aphrodite, the goddess of love; Athena, goddess of wisdom, Hermes, the messenger god, and so on. Persephone was the daughter of Demeter and Zeus, though she is mostly only recognized as Demeter’s daughter.

Synopsis: When the Hades, god of the underworld, falls in love with the Persephone,  goddess of spring, he is told by her mother that she will never be his. In a fit of anger, the god kidnaps his young bride and holds her hostage in the pits of the underworld. The young woman’s mother’s wrath causes the first winter to spread across the land, killing everything through droughts and famine. However, when the situation is confronted, it is found that the maiden has fallen for the god of death, and so a compromise has to be reached.

Hades: Hades is the god of the underworld and riches of the earth (minerals, jewels, and so on). He is one of the original gods, and falls in love with sweet Persephone, which leads him to kidnap her.

Demeter: Demeter is the mother of Persephone and one of the first goddesses. Her rage about the kidnapping of her daughter is the explanation Greeks had for the seasons, because her anger would stop things from growing.

Zeus: As the father of Persephone, ruler of the gods, and god of the sky, Zeus was one of the most important figures in his time. However, he also would rather avoid conflict, instead of dealing with it head-on.

Persephone: Persephone is the daughter of Zeus and Demeter and the wife of Hades. She was known as the goddess of spring, and was a fair, young maiden when she was kidnapped and dragged to the underworld by Hades.

Charon: Charon was the ferryman of Hades who helped souls cross the river Styx which ran through the underworld; a river that could prove itself to be more deadly than any others. He had to be paid to help souls cross over however, and so the Greeks typically buried their dead with coins over their eyes or held in their mouths.

Clytemnestra: Clytemnestra, the wife of Agamemnon, had been angry with her husband throughout the Trojan War because he lured their daughter, Iphigenia, down to the seashore to sacrifice her for fair winds. When he finally returned ten years later, she stabbed him to death as revenge for Iphigenia.

Agamemnon: Agamemnon was the king of Mycenae and leader of the Greek army in the Trojan War of Homer's Illiad. He is a great warrior but selfish ruler, infamously upsetting his invincible champion Achilles and prolonging the suffering of his men.

Menelaus: Menelaus was married to Helen of Troy and was a central figure in the Trojan War, leading the Spartan contingent of the Greek army, under his elder brother Agamemnon, king of Mycenae.

Achilles: Achilles was the greatest hero in Greek history and was said to be invincible, except for the heel of his foot, where his mother had held him while dipping him into the river Styx. He fought in the Trojan War and was known mostly for his courage and strength.

Helen: Helen, the wife of Menelaus, was kidnapped by Paris, a Trojan Prince, who took her to Troy. Upon discovering what had happened to his wife, Menelaus and his brother Agamemnon amassed their troops and sailed to Troy to retrieve her. The result was the Trojan War.

Cassandra: Cassandra was a beautiful prophetess cursed to never be believed. When the sun god Apollo fell in love with her, he offered her a gift for her to do him a few favors. She had accepted the offer and taken the gift, only to turn her back on him and not help him. As a punishment, even though she technically broke no rules, Apollo cursed her to have important visions of the future, and for no one to believe her.

Hermès: The messenger god Hermes was god of sleep, travel, thieves, trade, wealth, and luck. He invented many things such as the lyre and is the son Zeus and Maia (a nymph). Hermes is known to be a trickster but has proved himself worthy of being a god by helping many heroes in their quests, such as Odysseus.

HADES: A RETELLING OF THE PERSEPHONE MYTH

Ensemble of the Dead: